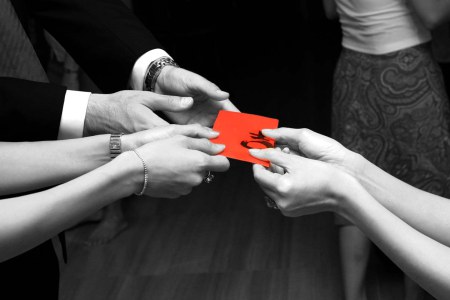 (Ruby and I preparing for the wedding…not ours, at least not yet!)

Not too long ago, Ruby and I were invited to her friend's wedding hūn lĭ 婚禮. This was the third wedding I'd been invited to since I've been in Taiwan, so I knew more or less what to expect. There are lots of interesting traditions that accompany wedding ceremonies in Taiwan, though in recent years do to Western influences, many of these have changed. For example, long ago, one of the things that was expected of the bride was for her to hand-sew her own wedding gown, wear a traditional head-dress fèng guàn 鳳冠. Nowadays people just don't do that, who has the time? But some traditional observances have survived.

For example, rather than giving presents to the bride and groom as we do in the west, friends and family give the couple red envelopes hóng bāo 紅包 when they sign in the guest book, and don't be offended or shocked when the family records how much you gave, it's part of the traditional culture so the bride and groom will know how to appropriately show their gratitude. Of course, close friends and family are expected to give more, and the minimum acceptable amount is typically 1200NT or about 36USD.

(This is a picture of one of the red envelopes you give/receive at a Chinese wedding. The picture was taken from here.)

Before we even get as far as the wedding, it is still commonly expected of the groom to ask the bride's family for permission to marry her, and often pay a dowry. The bride's parents use this money to buy furniture and other necessities for the newly-wed couple, so the dowry is mostly a symbol that the groom will be financially able to provide for their daughter.

Once the parents have agreed to the marriage, the family then consults the traditional lunar calendar to choose an auspicious date for the wedding. Then they have an engagement party , which is paid for by the bride's family, but when it comes time for the big day, the groom has to foot the whole bill! This is a little different from the way we do things back home!

(A few shots of the venue, it was pretty darn fancy!)

At the wedding, which is usually held at a hotel or a restaurant rather than a church, there are lots of activities and games. One of the activities at this past wedding we attended was a guessing game. When we first entered we selected one of several colors of paper to write our name on then stuff them into their respective jar, and hopefully guess the bride's second gown color correctly(the bride typically changes twice during the ceremony). The bride and the groom pull out slips of paper and lucky winners get to go to the front of the banquet room and offer words of congratulations, pose for a picture and claim a prize! We didn't win, but I won't hold it against those who did.

(Ruby, at the entrance to the hotel. She makes those flowers look bad!)

(the table where we guessed the bride's dress color, and the guest book)

Another one of the activities was played later on. Everyone had a box of candy at their spot at their table, and those who had a sticker on the bottom we the lucky winners of a memorial pin of the couple's wedding…Ruby was a winner this time, and I'm still jealous! These are just a few examples, but there are tons of possible activities. There is also usually a slide-show showing the couple's story and their pictures over the years.

If you have been to a lot of Western weddings, one thing you may notice missing is a wedding cake, but don't worry, you will have your choice of traditional dishes, and at the end of the ceremony the newlywed couple will present you with a box of gourmet cookies xĭ bĭng 囍餅! The character 囍 is made by joining two of the character xĭ 喜, which means happiness, which makes sense, because your wedding should be the happiest day of your life, right? It's not uncommon for newlywed couples to be given lots of gifts with 囍 on them, like napkins or coffee mugs for example.

If you ever have the opportunity to attend a Taiwanese wedding, take it, it will be an interesting memory that you will cherish for the rest of your life.

(That was fun. Not long before It's our turn too!)

囍=a combination of two of the character 喜, which means happiness (used for weddings)