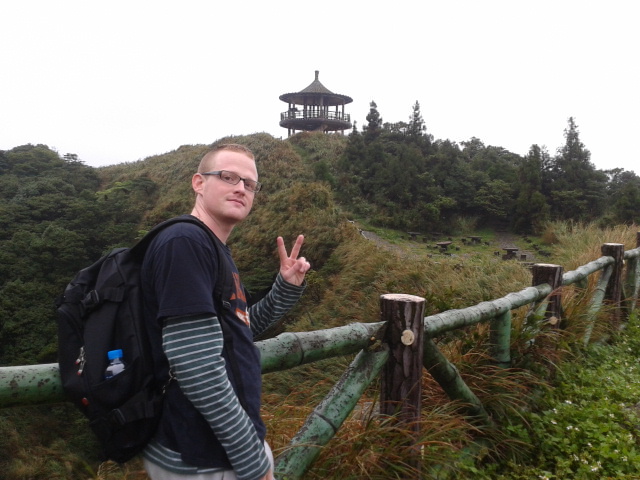 This past Thursday, I went to Yangming Mountain Park with a few friends. This place is huge, the air is fresh and the scenery is beautiful. There are tons of hiking trails, hot springs and scenery to take in, and it's also a famous place to go to see Taiwan's national flower, the beautiful plum-blossom méi huā 梅花, and many others when they bloom in the spring.

(Ruby and I with some beautiful plum blossoms…not at Yangming Mountain Park though!)

But we didn't wake-up at 5AM to take the train from Zhongli to Taipei just to see a bunch of flowers! Our mission was hiking to the tallest peak in the park, qī xīng shān 七星山 Seven-Star Mountain.

(A shot of the train station in the early morning)
We took the hóng 紅15 bus from MRT Jiantan Station which goes directly to the trail head. On my previous visit, I had taken bus number 260 from Taipei Main Station and switched busses at the Yangming Mountain Park visitors' center. Either way will work fine, depending on your plans.
This was my first time taking a bus directly to 七星山 though, and like any good adventure, it was a little chaotic. When we got off the bus, the sky looked really gloomy, and before we had figured out where the trail was, it started raining heavily. Luckily we were right next to a free wēn quán 溫泉 hot spring, and we were faced with a choice. We could either climb-up into the mountains in the pouring rain and freeze our butts off, or we could soak in the hot spring for a bit and wait the weather out. Easy choice, only there was an unexpected surprise…

(The hot spring from out front)

(The hot spring is on the other side…a naked hot spring. I had no idea it was going to be this kind of party!)
After relaxing in the hot spring, we decided to figure out where to go and asked around a bit. Eventually we took a bus back to the visitors center and got on another bus to take us to the trail head. We got off at the deceptively named 七星山 stop, which was nowhere near the mountain, and we had to walk for a bit before coming to the trail.
I had done this hike a few years earlier in the hottest part of the summer with my fiancé, Ruby, but it was a totally different animal this time. Hiking in the summer's heat made it a lot more difficult and exhausting, but this time it felt rather easy and it only took about an hour-and-a-half up and down, whereas it had probably taken around three hours total the last time. As you climb up, you can see tons of sulfur deposits and it feels like you've traveled to another planet.

(This sign talks about the volcanoes in the area which we owe the hotsprings to!)

(A few pictures of the misty mountain)
I had wanted to make this hike again because the last time I was there, my camera's batteries died when I got to the peak, and I was hoping to take a few pictures of the scenery from the top this time. Nature was conspiring against me, however, as the higher we went the foggier it got. we could barely see anything. And after a while the wind picked up and I felt like I was going to be blown away!

(They were building a new rest area and had left all of the tools out. This is when the wind picked up!)

(Here I am at the top. Couldn't really see much that day)
After hanging out at the top for a bit, we made our way back down the other side of the mountain and checked out the other peak. The scenery was spectacular and it was a fairly easy hike down. Embarrassingly, the trail ended just by the Lengshuikeng hot spring where we had started off at!