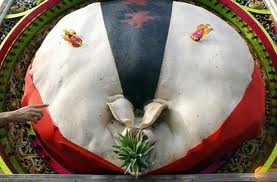 (Recently I saw a procession of decorated, God pig trucks drive by. Too bad I was on a bus at the time so I couldn't take better pictures)

Okay, so yesterday I wrote about the pet industry in Taiwan and how much people care for their animals. I want you to keep that in mind while you read today's article.

The God Pig Festival is a cultural tradition that's roots stem from Hakka origins.  A "God pig" called a shén zhū 神豬 in Mandarin, is a pig that has been raised to be a sacrificial offering. In the past the pigs were slaughtered in public and the meat was used to 拜拜, and then later shared with friends and family. The pigs are shaved but for a thin strip of fur, much like a mohawk, that runs the length of their back.

(My new hair style. My fiance shaved it for me!)

After they are slaughtered, their skin is cut opened and stretched out to make them look larger and rounder and a pineapple is put in their mouth. The reason for this is that it is thought to bring wealth, as the word "pineapple", fèng lí 鳳梨 which is pronounced o'ng lai in Taiwanese sounds similar to wàng lái 旺來 "bring  wealth and prosperity". The character wàng 旺 means prosperous and many stores will have a sticker with this word written on it placed somewhere in them.

(look at the pineapple stuffed in his mouth…that's right, a pineapple, not an apple)

But nowadays this practice is seen to be cruel to animals, the days of public-pork executions are over.

(The picture says it all…)

神豬 are force-fed to the point where they cannot stand, much less walk on their own feet. Families compete against each other in a contest with the goal of raising the fattest pig. It is not uncommon for a 神豬 to weigh over 1000 kg! And the title-holder (or former title-holder, seeing as he's no longer among us) weighed in at a grand total of 1054 kg! That's a big pig!

(a contest where only the fattest prevail)

There has been a lot of controversy about the inhumane treatment of the 神豬, but it is an old religious tradition that is important to the Kè jiā rén 客家人, Hakka people. I am an animal lover, but I also respect other cultures and their practices, so I will stay neutral on the subject. The point of this article is to let you hear about a unique cultural practice that you might not have heard of otherwise.

The second two images of the God pigs were found at http://vivoverde.com.br/em-taywan-ocorre-um-sdico-festival-de-louvor-a-deus-utilizando-porcos/ and the picture of Porky Pig was taken from http://free-extras.com/images/porky_pig_thats_all_folks-5172.htm