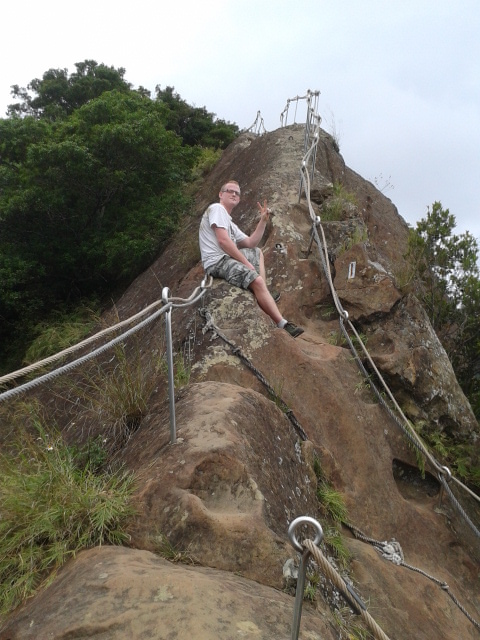 This past week was action-packed, with pirates and buried treasure around every corner…not really, but I got to go hike some awesome trails, some that I have been to before and others that were totally new to me. Now, first on the list in this three-part series is….

On Tuesday I went to Wuliaojian 五寮尖, which is in the mountains between Sanxia and Wulai in xīn bĕi shì 新北市 New Taipei City. The best way to get here is by car or scooter, but there is public transportation as well. You can take a bus to Sanxia and then transfer number 807 from Sanxia.

The path starts at hé zuò qiáo 合作橋 along the side of Highway 7. Just as a lot of the best hikes in Taiwan, the trail starts at an unassuming and utterly random stone-stairway sticking out of the side of the mountain. If you didn't know it was there, you would drive by without even noticing it. Well, now you know, so what's your excuse?

There are lots of paths around the mountain that all end up eventually taking you to the same destination, though the level of difficulty varies. Either way, allow at least 3-4 hours to finish the hike and bring plenty of water (foolishly, I only brought one tiny bottle and was getting thirsty towards the end). And if you're a pale-skinned freak-of-nature like I am, do yourself a favor and bring sunscreen! I forgot to, and I am as red as a Maine lobster as I am typing this! Plus if you plan to go swimming, a swimsuit and a change of clothes wouldn't go amiss, though I didn't have either.

(We had to scale down this huge cliff wall)

(Just check out the view from the top! This is Taiwan!)

(Who wouldn't want to take a dip after a long, sweaty hike? The water was cold and refreshing!)

All of that aside, you're in for a challenging hike which you'll be rewarded for with a ton of gorgeous scenery and an experience you won't soon forget, but I wouldn't advise beginners to try it until they get a little experience under their belts, and it's a good idea to go with a friend regardless of your skill level.

(Have fun and stay safe out there!)

How To Get There:

Wuliaojian 五寮尖– It's difficult to get here if you don't have a scooter or a car, but it's doable. First take a bus to Sanxia and then transfer to bus number 807. Tell the driver where you are going and he should tell you when to get off. The bus stop is called Hezuo Bridge 合作橋.

The swimming spot- It's just a few minutes down the road from the trail head on the left. Go slow, it's easy to miss. You can get down into the river from the other side of the bridge by taking the stairs next to the temple.