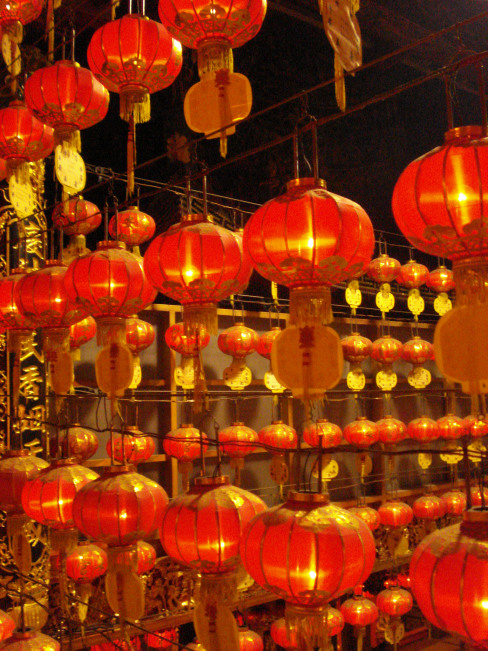 But happy Ghost Month all the same!

Ghost Month, or guǐyuè(鬼月) is a period of time when the gates to the underworld open and ghosts are free to roam the Earth. Ghost Month has many interesting superstitions and observances associated with it. According to tradition, during Ghost Month, it is unlucky to move into a new home, buy a new car, get married or even hang your clothes to dry(as ghosts may wear them!). Colorful lanterns are hung all along streets, and lanterns in the shape of houses are painstakingly constructed, only to be later burned.

My first year in Taiwan, I was very lucky to witness a very special celebration in Keelung, where Ghost Month is still an important tradition. The locals assembled at the mouth of a temple in the harbor and a speech was given by the mayor, welcoming all to the year's celebration. Afterwards there were fireworks and martial arts displays, and if this wasn't enough, it began pouring rain.

Rain or no rain, the celebration was just getting started. Parade floats marched through the city in the wake of performers and dragon dancers, loaded with drummers and children tossing handfuls of candy to the masses. It was very colorful to say the least, and I honestly had no idea what to expect next.

I followed along with the procession, which was slow and jam-packed with what seemed like the entire city's population. Slowly but surely we made our way to a beach miles down the coast where the house-shaped lanterns were unloaded and pushed out into the ocean and set a flames.

The ceremony is called fàngshuǐdēng(放水燈) which can be loosely translated to the placing of the water lanterns. This was truly one of the most memorable of my experiences in Taiwan, and I recommend you all to check it out if you have the chance!

placing of the water lanterns = fàngshuǐdēng(放水燈)